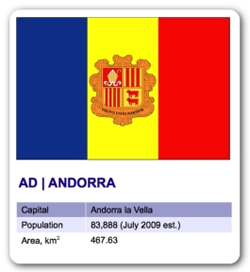 The Principality of Andorra is a small country in southwest Europe with an area of 468 km2 located in the Pyrenees between Spain and France. It is a Parliamentary Co-principality and has as Heads of State the French President and the Spanish Bishop of Urgell; however, they don’t interfere in the country’s politics and the country has been consolidated as a Parliamentary Democracy. Tourism is its main industry, because it represents 80% of the economy. Unemployment continues to be low there, while inflation tends to be very similar to that of France and Spain. Andorra accepted the Euro in January of 2002, and signed the monetary Treaty with the European Union in June 2011.

There were no taxes on resident companies or Andorran citizens until 2011. It was only necessary to pay a few small fees for the yearly registration, local taxes, and property transaction taxes, among others. New legislation was introduced beginning in April 2011 that set a 10% tax on corporate income, first on non-resident companies that, from that date, have to pay a tax on income obtained from local sources, while resident companies and people involved in commercial activities have to pay a 5% tax since January 2012; this latter will increase to 10% in 2013.