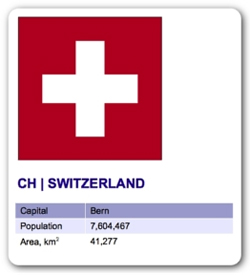 Switzerland is a mountainous country located in Central Europe. Officially, it maintained strict neutrality during the two world wars, although beginning in 2002 this has changed and Switzerland has turned toward the right wing. It is not a member of the European Union, although it has been invited several times and at present there are “bilateral agreements” with the UE for the country to gradually become part of the Union. Switzerland is a member of the OECD, and is probably its most financially secure member. The services sector contributes 70% of the Swiss economy, with more 200 thousand of its citizens working in the banking sector. Experts consider Switzerland to be the major world-wide center for private banks, with more than one third of all private capital placed in its banks. This interest is due to at least three factors: its neutrality, an ultraconservative financial policy that has brought the Swiss franc continuous growth and the strong bank secrecy there that has survived heavy penalties from pressure from the western world.

Switzerland is not an offshore jurisdiction such as the Cayman Islands or Jersey, even though it is a minimum tax jurisdiction, having had a series of specialized companies that can be used by foreign investors and multinational corporations for noticeably reducing tax payments. As a respectable member of the OECD, Switzerland has signed double tax treaties with more than 100 countries. Switzerlands bank secret suffered a serious bow when, in 2009, the G20 and the OECD placed the country on the grey list of countries that do not comply with the required norms regarding transparency. After this, Switzerland agreed to comply with the requirements and in less than six months signed 12 information exchange agreements that contained ample clauses for administrative assistance. This influenced the countrys being taken off the grey list. Nonetheless, Switzerland continues to affirm that some requests for information from other countries will be dealt with individually, and if the request is based on stolen data, no information will be given.