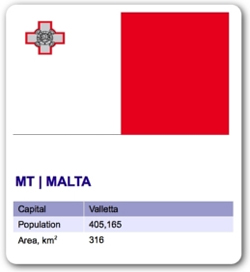 Malta is an independent nation, who broke away from the United Kingdom in 1964. The islands of Malta are situated 00 kilometers south of Sicily, and have a population of more than 400 thousand. Malta has kept the democracy style of Westminster, but has been much divided politically since gaining its independence. Malta has been part of the European Union since 2004. Tourism is the main source of income for the country, especially from visits by cruise ships. Because of its political stability Malta has become one of the favorite destinations for retired people, especially for English speakers. This interest in the company as provoked a boom in the real estate market. Nonetheless, Malta’s future in the long term will depend on their financial services. Since there are few natural resources in the country, the government has discussed creating a sector for high tech manufacturing. In addition, it has decided o to offer ample incentives to investors, with objective of attracting more capital. Malta’s legislation for baking, mutual funds, securities and trust services are delayed in being adopted and this delay causes the country to not develop as quickly in the offshore sector as other jurisdictions have done. There are high internal taxes in Malta; however, a minimum tax regime is offered to companies and individuals.